If you are familiar with the world of numismatics, you probably know that the Indian head penny collection is worth a lot of money, depending on its condition. A few of these coins can bring you multiple of their head value.

Each of them is over 100 years old and contributes to US coinage history, but it is a real challenge to find it in mint condition. So, let’s see what the 1898 Indian head penny value is and how to grade it.

The first Indian head penny was minted in 1859 to replace the Flying eagle pennies that had design problems. The Philadelphia mint produced Indian head pennies from 1859 to 1909, when it began to mint new Lincoln pennies.

The San Francisco mint also made Indian head pennies, but only in the last two years of the series, 1908 and 1909.

The average mintage for the Indian head pennies was 34,252,575 a year. It contained 88% copper and 12% nickel until the Philadelphia mint changed its composition to 95% copper and 5% tin and zinc. Since people were using them daily, there were not many coins in a mint state.

1898 Indian head penny is not rare thanks to the historic moment. The Civil war ended more than 30 years ago, and society and the economy were recovering. Plus, the US Congress declared war on Spain on April 25, 1898.

By the end of the year, this penny mintage came close to 50 million coins. However, only a few remained in perfect condition, and dedicated numismatists are ready to search for years for a well-preserved penny and to pay it dearly.

In rare cases where the collector needs only one coin to complete the series, the 1898 Indian head penny can actually cost a small fortune. 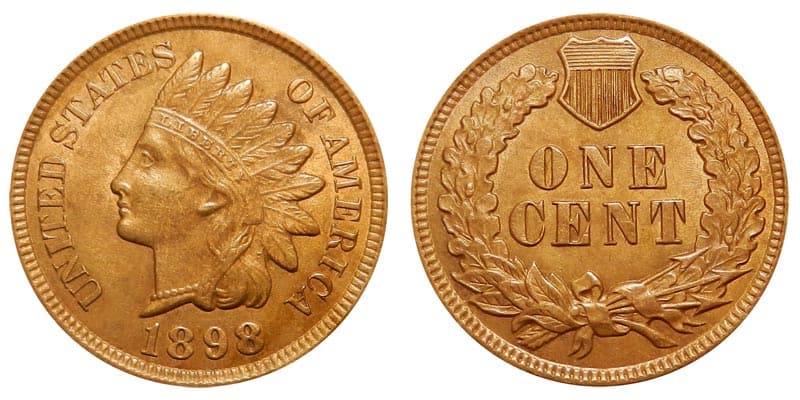 James Barton Longacre, the fourth Chief Engraver of the US Mint, created the 1859 Indian head penny design. The coin has Lady Liberty on the obverse, while the oak wreath and the inscription ONE CENT are on the reverse side.

The conceptual design pays tribute to the diversity of American society. If you inspect the penny closely, you will see that Lady Liberty wears the Indian headdress on her head.

As you already know, such decoration is characteristic of Native Americans. An anecdote says that the designer made Liberty after the character of his younger daughter.

Allegedly, an Indian chief put his traditional headdress on the girl’s head when visiting Longacre. The girl was amused and played with it while her father used the opportunity and made a sketch for the future coin design.

The word LIBERTY spreads across the ribbon, and the inscription UNITED STATES OF AMERICA surrounds a female bust.

Even though you can see a diamond line around the coin perimeter on both sides, its edge is plain. Since it was minted in Philadelphia, you can’t see a mint mark on this penny.

Interestingly, James Barton Longacre also designed the Shield nickel and the first coin with engraving IN GOD WE TRUST, two-cent mintage. His other work included the Flying eagle cent, three-cent piece, and half dime coin. 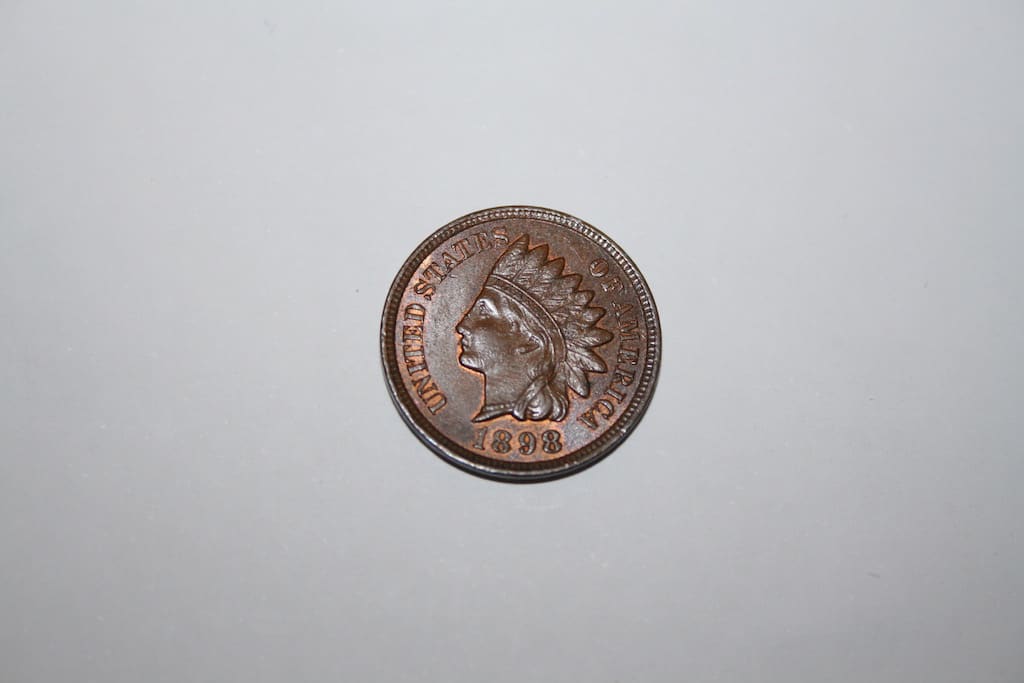 Several factors determine the 1898 Indian head penny value. You can find dozens of these coins with a simple online search. Usually, their prices vary between $5 and $50.

Plus, almost every local collectible shop has one or two pieces. Yet, one 1898 Indian head penny reached the price of $1,495 in one auction in 2007.

The primary value indicator is your coin condition. For instance, you can sell an average good preserved penny for around $3. If you have an uncirculated 1898 Indian head penny, most dealers will offer you between $25 and $40 for it. Keep in mind that a brilliant uncirculated penny is almost impossible to find.

Brown 1898 penny is the cheapest among brilliant uncirculated coins, while the red one is most rare and, hence, the most expensive. If you are lucky enough to possess one of these, you can sell it for between $169 and $665, depending on its color.

For comparison, the rarest and most valuable Indian head penny 1888 8/7 error in good condition is worth about $1,500. An uncirculated coin can quickly reach $30,000.

The reason for the considerable difference in their prices is that the 1898 Indian penny is much easier to find.

If you are curious to find the 1898 Indian head penny melting value, you can quickly calculate it. All you need are current copper and zinc prices.

Besides, you can’t melt this coin even if you want to. As of December 2006, the law doesn’t allow melting US minted pennies and nickels. You can melt dollars, dimes, and quarters, but melting an Indian head penny will result in a legal fee of up to $10,000. 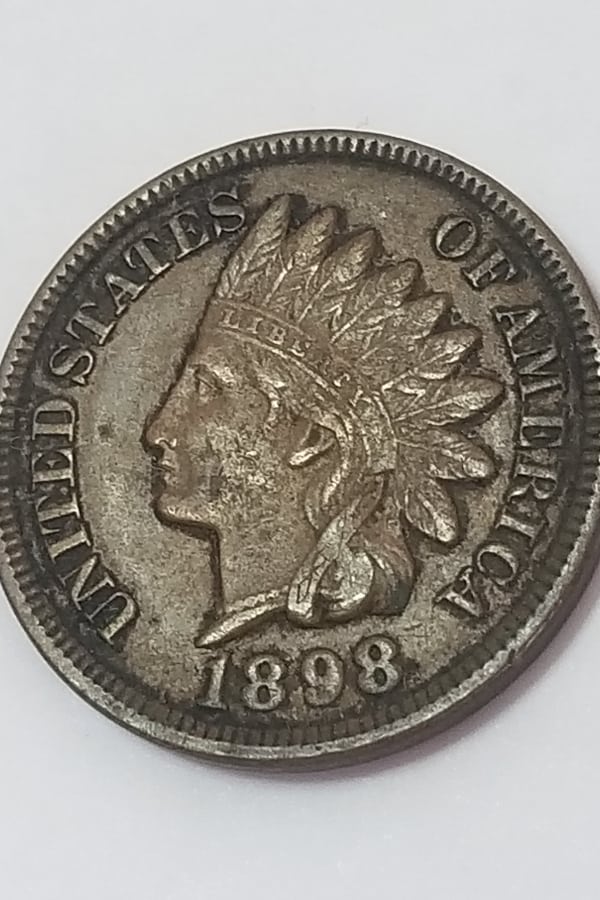 If you have an 1898 Indian head penny you want to sell, you will probably want to know its precise value. There are many coin grading associations in the US, but the four most renowned are:

Keep in mind that professional coin dealers accept only damage-free pennies. That means neither you can use chemicals to clean the coin nor it can be bent, damaged, or otherwise stained or discolored.

In fact, the best solution is to take your penny as it is, without trying to make it more preserved. Don’t clean it at all! Never!

There are some key determinants you can spot with a naked eye and help you roughly classify a coin into some of the grading categories:

Uncirculated – This Indian head penny should be in almost perfect condition because it was not in circulation. Only the professionals can spot some discoloration as a consequence of its age. Close examination shows no worn signs even on the ends of the feathers and Liberty’s eye or neck.

Extra fine – This coin is barely worn out, and all the details are visible, including the letters, cheek, necklace, and a ribbon trail. You can see a diamond ring around the penny edge, as well as feel it clearly under your fingers.

Fine – Most of the design is visible even though the coin’s surface is smooth and worn. You can recognize hair curls and a woman’s headdress, but the Liberty inscription has entirely or partially disappeared.

Good – This Indian penny has been used frequently and has gone through many hands. As a result, both sides of the coin are smooth. The design is worn out and difficult to recognize with the naked eye. You can outline the female bust and shield on the other side.

1898 Indian head penny value ranges anywhere from $2 to almost $1,500, which is the maximum price this coin achieved at the 2007 auction. Its value depends on preservation, color, and build. Never try to clean the penny because you can damage it and decrease its value. Plus, you can’t melt it since it has been illegal since 2006.

How Much is a 1890 Morgan Silver Dollar Worth? (Price Chart)