Are you a coin collector or silver hobbyist? Look no further than the 1924 Peace Silver Dollar value review. The 97-year-old coin is still a highly sought-after collectible in pristine condition. It features the profile bust of Miss Liberty, popularly seen on New York’s Liberty statute.

Read on to learn about this iconic coin, fun facts, value at numismatic markets, and a few frequently asked questions.

What is the 1924 Peace Silver Dollar?

It is one of the last circulating silver dollars, struck in 1924 to commemorate the end of the First World War. The 1924 peace coin is a silver currency designed by Anthony de Francisci, a 34-year-old designer and sculptor. 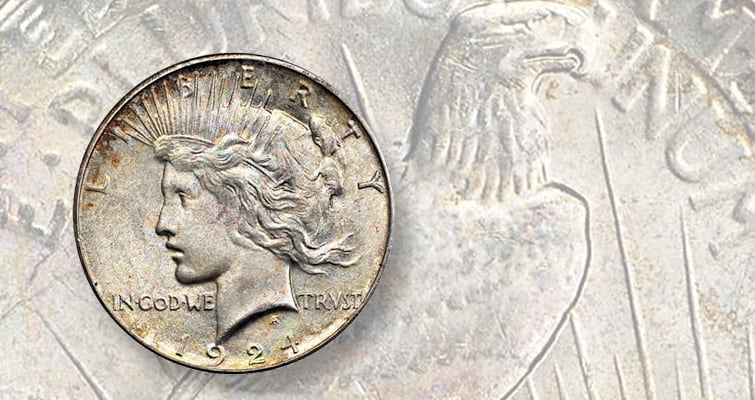 The 1924 Peace Silver Dollar came from a dire need to commemorate the official end of the First World War. Five years after the war, the citizens experienced a renewed hope to enjoy peace using the newly struck peace dollar.

Besides, America was in a state of economic regression, caused by currency inadequacy. As a result, Nevada senator Key Pittman sponsored an act that legalized silver dollars into bullion. The law further allowed the sale of the bullions and directed the mint to purchase not more than 350,000,000 silver dollars to produce silver dollar currencies.

The US mint deliberately moved to replace the Morgan silver dollars rendered obsolete by the Pittman Act. The act was a federal law sponsored by the then Nevada senator, Key Pittman.

In addition, the coin was a dream come true for Anthony’s wife, Teresa. She missed a chance to act as an American goddess in a high school drama from historical accounts. As a result, she always felt upset whenever she set eyes on the Liberty statue, symbolic of the American goddess.

When her husband Anthony landed an opportunity to design the country’s peace silver dollar, he honored his wife by using her portrait as the model for the coin. Using Teresa’s image would be a remarkable fulfillment of his wife’s old dream.

Production of the 1924 Peace silver occurred at two mints, namely Philadelphia and San Francisco. The main mint produced 11,811,000 pieces, while the branch mint at San Francisco only struck 1,728,000 pieces of the peace silver. In total, both mints struck 13,530,000 peace silver dollars.

Features of the 1924 Peace Silver Dollar

Like other silver peace dollars, the 1924-dollar coin has subtle features on both obverse and reverse sides. The most notable is the youthful portrait of a young lady who wears a ray-like crown.

Below are standard features you’ll find on a 1924 Peace silver dollar: 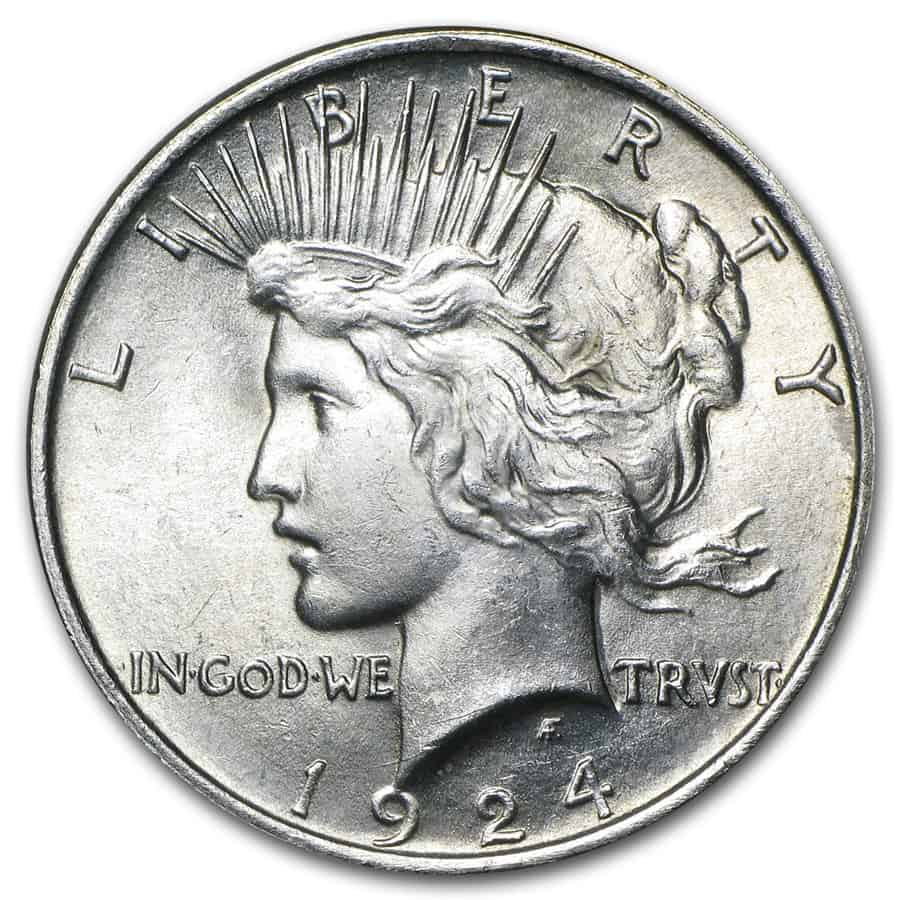 The obverse features a profile bust of Miss Liberty facing left. She wears a crown with sparkling rays radiating from her head. The lady in the portrait has a classic hairstyle with a few hair waves hanging low.

Above her head is an inscription “LIBERTY” in block letters along the upper rim. The coin’s year of mint appears as 1924 along the lower edge of the coin. Slightly above the year of issue is the sculptor’s initials written as “AF.”

The 1924 Peace silver also has an inscription “IN GOD WE TRVST” written in a straight-line text on the lower portion. However, designer Anthony de Francisci deliberately put “V” instead of “U” in the word “TRUST.” Reliably, De Francisci aimed to celebrate America’s victory after the famous world war. 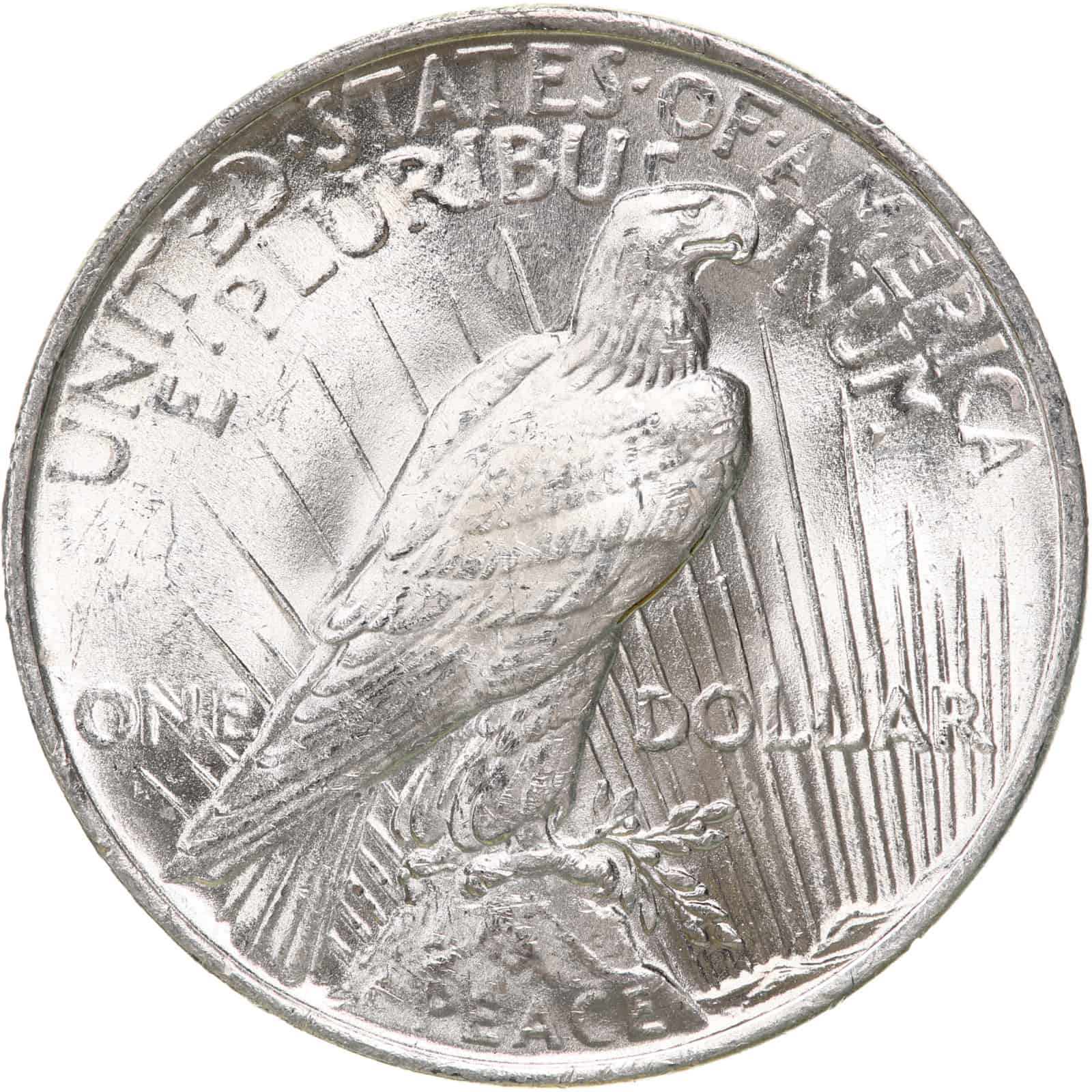 The reverse features a perched, bald eagle on a rock and facing right. The eagle holds an olive branch on its claws to symbolize peace. In addition, bands of arrows radiate from the surrounding ground to represent the country’s military strength.

The reverse also features “E PLURIBUS UNUM” and “UNITED STATES OF AMERICA” along the upper edge. The coin’s face value appears as “ONE DOLLAR” in a straight line of text and the word “PEACE” along the lower edge.

The silver dollar is a composite coin with a dominant silver content. It contains 90% silver and 10% copper.

Value of the 1924 Peace Silver Dollar 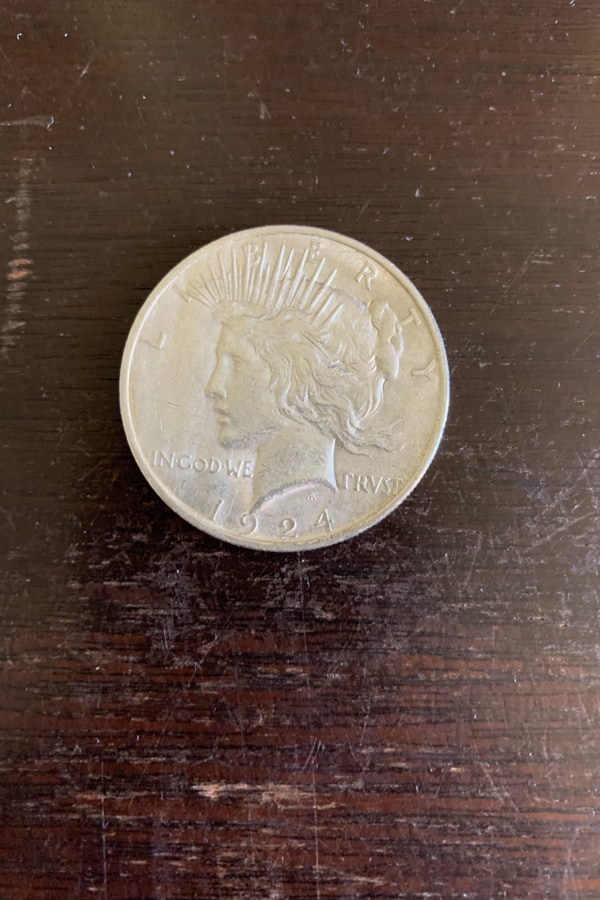 The 1924 peace currency has considerable value both as a collectible and numismatic coin. Look at how valuable the coin is at the pawnshop and numismatic markets.

On the coin’s reverse, its value appears as 1 dollar. It is, therefore, worth a dollar at face value.

What Is the 1924 Peace Silver Dollar value at the Pawnshop?

At the pawnshop, a 1924 piece silver dollar is worth $25 in very fine condition. If you have it in extremely fine condition, pawnbrokers will award you $28 for the coin. An uncirculated MS 60 will earn you about $35 or more, while a 1924 S dollar of the same grade is worth about $300.

The Standard Value of the 1924 Peace Silver

Currently, the standard value for the 1924 silver stands at $26. However, the price is an average estimate given by coin trackers and may be slightly higher or lower by a few cents.

Comparison Table showing the value of the 1924 Peace Silver Coin 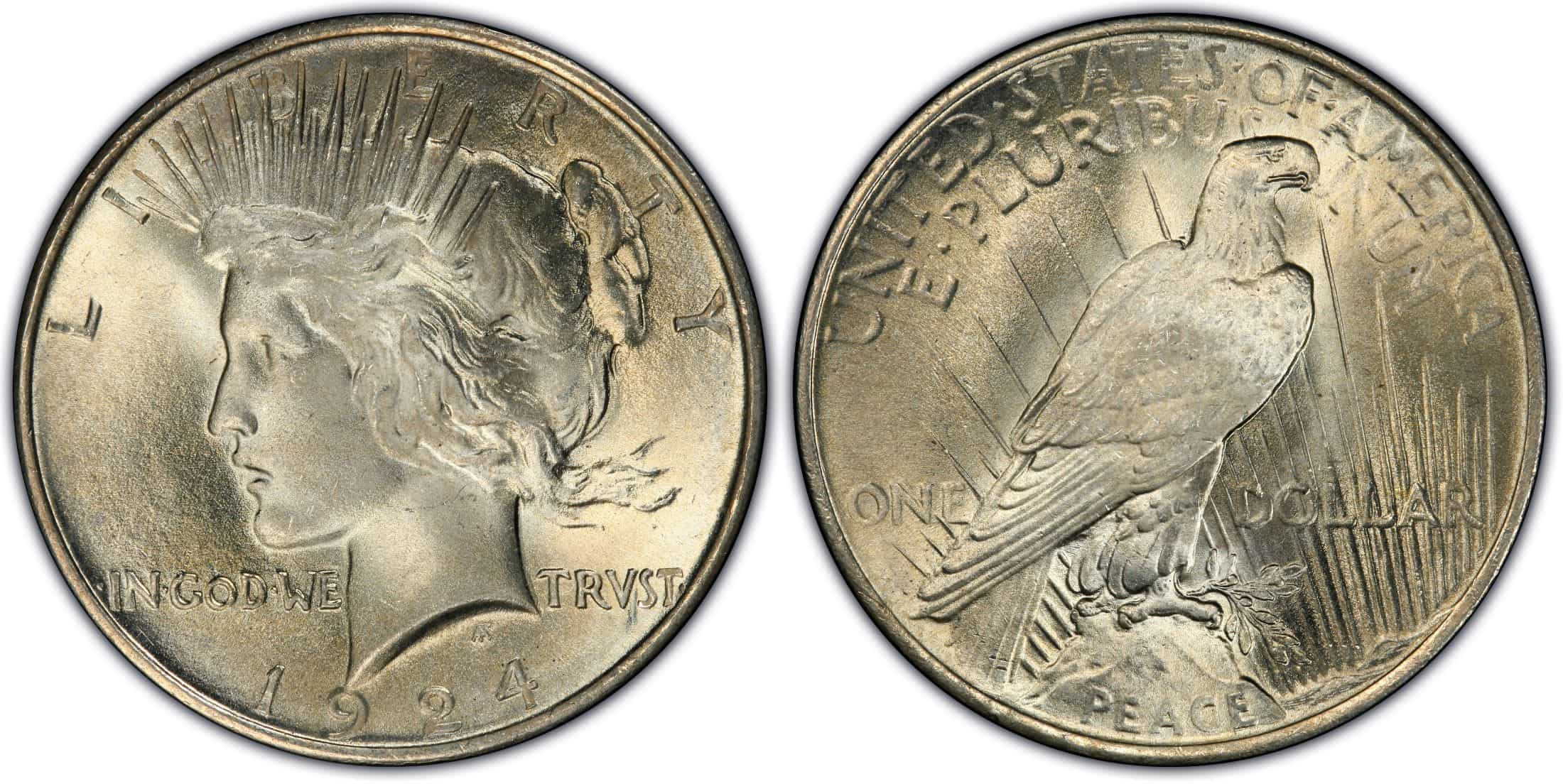 Since its first roll-out in 1924, the silver dollar is almost a century old. Hence, it pays to have a coin that collectors prefer. Below are factors that determine the value of the coin:

Depending on its grade or condition, your coin may be worth tens, hundreds, or thousands of dollars. You may spend time judging the level of wear on images and inscriptions to determine its value. Besides, you may obtain expert grading services from a coin expert.

Below are the four primary grades of 1924 silver:

The highest grade in uncirculated condition depicts a silver coin with a strong eye appeal and luster. It may have a few contact marks, but all features are still visible.

In this condition, the coin should retain most of its unique features with visible but minimal wear. It is bright, sparkling, and has an attractive silver luster. However, the coin may have minor stains, surface marks, or abrasions.

In this condition, your coin lacks some features and begins to enjoy premium values. Collectors may only accept slight wear, specifically on the highest parts of the coin’s design. The currency should have an apparent fullness of the round features on Miss Liberty’s hair. The hairband at the back should be bold, with only a slight merging with the nearby details. Additionally, the feathers on the eagle’s wings may be slightly faint but still visible.

Your coin has visible signs of scratches, although some hairs strands near the ears are still intact. Some portions of the eagle’s feathers on the right edge may still be visible. 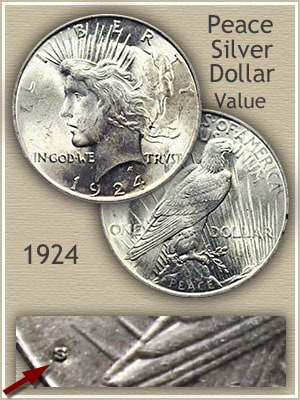 In 1924, the San Francisco branch mint only accounted for 14% of the total production out of the silver dollars struck. As a result, 1924 silver dollars bearing the mark “S” are scarce and more valued than their Philadelphia counterparts. An uncirculated 1924 S with an MS 60 grade will fetch as much as $235 or more.

Although peace dollars have a few mint errors compared to the Morgan silvers, they still occur. The most common error on a 1924 peace dollar is a double strike, where both the obverse and reverse may have similar images. So, if you have a 1924 silver error coin, be sure to preserve it since it is a precious rarity. 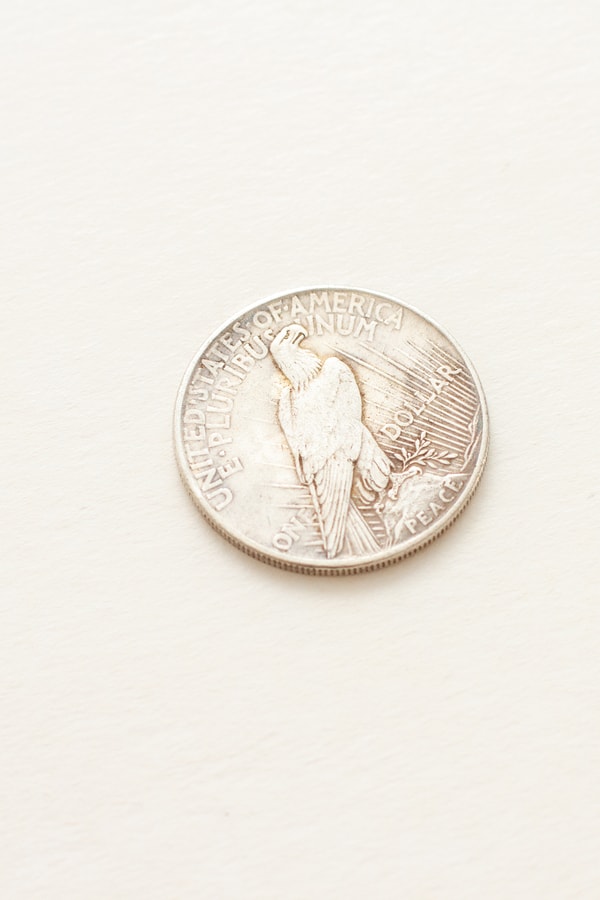 1. What is the Highest Auction Price for the 1924 Peace Dollar?

The highest price recorded for the 1924 Peace silver coin was in 2005. The old currency earned a whopping $54,625 at a public auction. According to grading standards by PCGS, it made an MS 68 grade.

The 1924 issue is one of the most common series in both circulated and uncirculated conditions. Therefore, there is no scarcity of 1924 silver coins.

The 1924 silver mint mark appears on the reverse side of the coin below the word “ONE.”

The silver dollar has value not only as a numismatic coin, but silver bullion. Coin collectors crave its numismatic value in uncirculated condition, while silver investors eye its high silver content.

A sparkling silver luster, a high silver content, and more than $300 in uncirculated condition, all make it a good investment. For questions on how to grade your coin, contact us today!